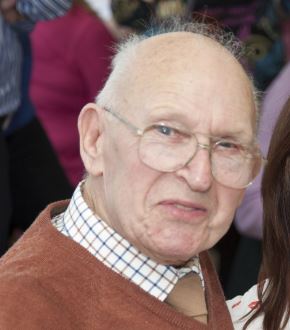 Ray Thompson turns 90 on 4th August but you wouldn’t know it when you see him jumping around helping other members of the Winsford Community Compass group. Spritely Ray talks fondly of how much he enjoys coming to the Monday morning group held at The Dingle, where he enjoys chatting to his friends George and Derek. Together they are affectionately called the ‘Three Musketeers’ by the rest of the group because they always sit together and share stories.

Ray has found the friendship and support he has gained from the group to be invaluable. Three years ago, he lost his wife of 66 years, Margaret, to lung cancer. It happened quickly and he found it very difficult to accept. His Doctor recommended going along to some social groups and he hasn’t looked back.

In his own words, Ray is crazy about ships and as well as working his entire career on boats with ICI, and the Merchant Navy before that, him and Margaret enjoyed cruise holidays for 17 years of their married life. It is these experiences that inspired him to begin write poetry which he now enjoys sharing with his new friends. On one trip on the TSS Canberra shortly after it had been changed into a cruise ship after serving in the Falklands war, Ray wrote a poem that would lead to him and his wife to join the prestigious Captain’s table! Ray recites completely from memory:

“To be at sea in a good ship, with the sun, sea and the sky, when all they had in the old days where the stars to steer them by.

But this old lady, the Canberra, will take you to far off lands and as all English know, she served in the far Falklands. There is an atmosphere on board this ship, she is a cut above the rest, from Captain to Cabin Boy, and they always give their best.

The Captain and his crew, so courteous and kind with always the safety of the passengers in mind. The Chief Engineer on board really knows it all, for without him and his Engine room staff, she will go nowhere at all.

The Chefs and all the dining staff always make it seem, you cannot beat their service or the ships cuisine. The theatre companies on board who really give a treat, as they perform Les Miserables to Forty Second Street.

The next day may be different in every kind of way, to arrive at some exotic port would really make your day. To go ashore or do a tour or have a little roam, when you return to Canberra, you will find it’s home from home.

They all dress up for dinner, it’s very nice to see, and it’s what they call Ships Protocol and just has to be. Yes, the ladies and gentlemen all dressed up to the nines and then a little drink and they all go down to dine.

And so it goes the life on this old lady of the sea, a life that would suit anyone, especially you or me. So if you want a cruising holiday you will never forget, get on board Canberra, it’s the best you will ever get.”

Ray wrote the poem whilst on board and shared it with a fellow passenger who then took it up to the Captain without Ray knowing! Clearly the Captain and crew all loved it and Ray now has such a special memory of being on the top table during one of his trips.

This wasn’t to be the only time Ray received an accolade for one of his poems. Despite the fact Ray has only ever written for pleasure and shared his poems with his friends, his writing has ended up in the hands of some rather famous people which has led to some surprising praise through Ray’s letterbox over the years. Ray shares that he once received an unexpected letter from the Whitehouse after he wrote a poem about 9/11 for a friend in America. That friend was so moved he sent it to the President, George Bush, who wrote back to Ray thanking him for thinking of him!

Modestly, Ray shares that the other members of the group aren’t aware of this accolade as they spend their time chatting about other things, keeping each other company and helping one another out. He shares that the Community Compass group has really made a massive difference in his life and he looks forward to his weekly get togethers’ with his fellow musketeers!