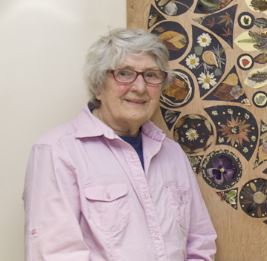 Joan was feeling lonely before she discovered the Brightlife social group in Malpas. She’d always led an interesting life as a teacher of the deaf and as an activist in different kinds of campaigns including anti-nuclear, women’s rights, anti-apartheid, domestic violence and prison welfare. It was during her recovery from breast cancer that she found out about Brightlife.

“I didn’t know anyone in Malpas when I moved here and was just sitting in the house on my own day after day. So, I decided to join the NHS walking group when someone mentioned the Brightlife social group. It has really helped to bring people together and I have met some amazing people … including my friend Doris who had been in the WRENS during the war. Sadly, she passed away recently but if it had not been for Brightlife we would never have met. That is what this is all about – meeting people, discovering their stories and making friends.”

Joan believes that the great thing about Brightlife is that it is older people who are involved in shaping the projects, so they are putting on events and activities that she is interested in. She worked in a residential home for a time in her career and explained that she always asked the residents what they wanted to do before she organised things for them.

When asked what advice she would give her younger self, Joan said: “It is all about confidence. I would tell my younger self to go for things and find out more – when I think back, I was afraid of so many things that I needn’t have been!”

Joan is a truly amazing woman for all of the campaigning she has done throughout her life, tirelessly working to give a voice to difficult issues (although she refuses to accept she is amazing!) … but even now at 88 she continues to tackle issues that she believes in, no matter what her age is. That is truly inspiring and amazing to anyone.